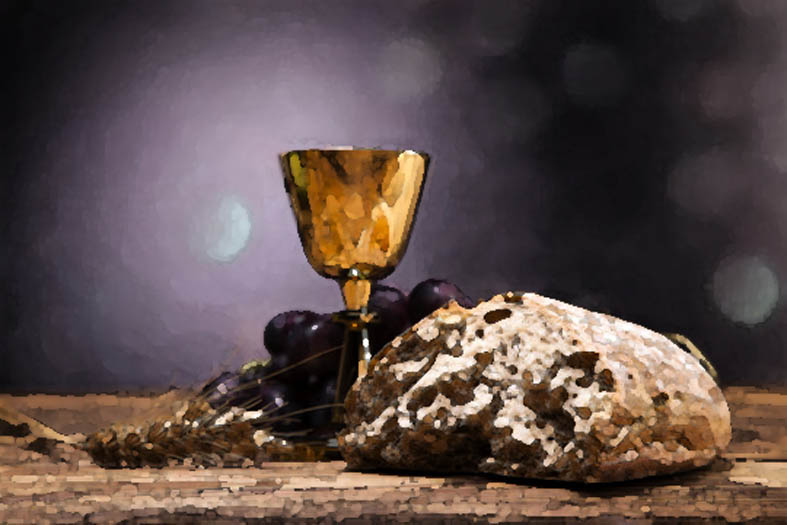 Foods have always played a key part in rituals and the worship of the Gods. Without food we would not live at all, and its production was one of the central themes of ancient religions.

One of the most valuable of the ancient foods was grain, which could be made into flour and then bread. It is one of the most important symbols of the nurturing Goddess, sometimes seen as her son, the vegetation god who would awaken in the spring, grow through the summer and mature in the autumn, only to be harvested and die. The shed seeds lay dormant in the cold, winter earth, the belly of the Earth Mother, ready to shoot again in the spring. This was a never ending cycle of life, death and rebirth, a cycle also promised to worshippers.

Eating bread and drinking wine was an important part of the rites of vegetation deities. An ear of corn was the central mystery of Eleusis in the worship of Demeter, and bread was eaten in the rites of Artemis and Cybele, often baked in circles and marked with a cross, probably representing the four solar festivals of the equinoxes and solstices. This is still seen today in our hot crossed buns, eaten at Easter, which was once the springtime observance of the resurrection of the vegetation god.

For ancient Pagans, grain and wine were god-essences. When we consecrate bread and wine in a ritual, we invoke that god-essence, the spiritual core of the food; through it, we absorb the power of the Gods. It nourishes us, physically and spiritually.

Wine is one of the ‘god-containing’ substances believed by the ancients to allow people to share in god-consciousness. Whereas bread is viewed as the body of the sacrificed god, wine is his blood, or sometimes it is seen in traditional British Craft as the blood of the earth goddess. The taking of the two together signifies the union of opposites. The cup that contains the wine symbolises the cauldron or grail, which contains wisdom and inspiration.

The chalice of wine and the platter of bread are passed around the circle with the words “Blessed Be” to be shared by all present with love and blessings. This intimate act creates a connection with every other person present as well as a communion with the Gods. It comes at the end of the ritual and helps to ground the participants before the circle is broken.

Making the Wine and Bread

The wine for ritual should be home made. Country wines can be made with seasonal ingredients – strawberries at Midsummer, blackberries at the Autumn Equinox, hawthorn flowers at Beltane and so on. Our favourite for Samhain is sloe gin and for Yule we always have mulled mead. You can find recipes for all of these in this book.

The wine should be put to brew with a blessing such as:

Festival bread is made especially for the ritual. It is made with due ceremony and intent; buying a machine-made loaf from the supermarket just isn’t good enough as an offering to the Gods. In many parts of the world, different breads are made for different occasions, their shapes and varieties reflecting the festival and its symbolism. Traditional loaf-shapes are based upon binding knots or in the shape of suns and moons, animals and humans.  It would be appropriate to have a sun-shaped loaf for Midsummer, or one in the form of a sheaf of wheat for Lughnasa, and so on.

The bread is put to bake with a blessing, such as:

The Blessing of the Cakes and Wine

This is done in different ways by different Pagan groups and traditions. In some covens, the consecration is done by a priest and priestess together. The priestess might hold the cup while the priest plunges his athame into it and one of them will speak the blessing. In those groups that believe polarity is reversed on the astral, the priest holds the cup (the feminine) and the priestess plunges her knife (the masculine) into it and utters the words of consecration. In other groups, the priestess will bless the wine and the priest the bread, or vice versa.  We like to share this task out between coven members so that at each festival a different person is responsible for blessing both the cakes and wine. They are usually asked to write their own words, which makes them consider what the ceremony means, but you might like to use something like this:

If the food has been made with intent and consecration, it becomes more than ordinary food, and thus makes a suitable offering to the Gods and spirits. When we bless the bread and wine, before we take any, we offer a portion to the Gods. Bread is thrown onto the fire so that its essence might be released to them with the words “The first is always for the Gods”.  A libation of wine is made in a similar manner. (A libation is a pouring of wine, milk or other drink onto the ground or before an image as an offering to the Gods.). We always leave more food behind in the woods for the local spirits after the feast. In reality, of course, it is the animals and birds that eat it, but we consider that first the spirits consume its essence.