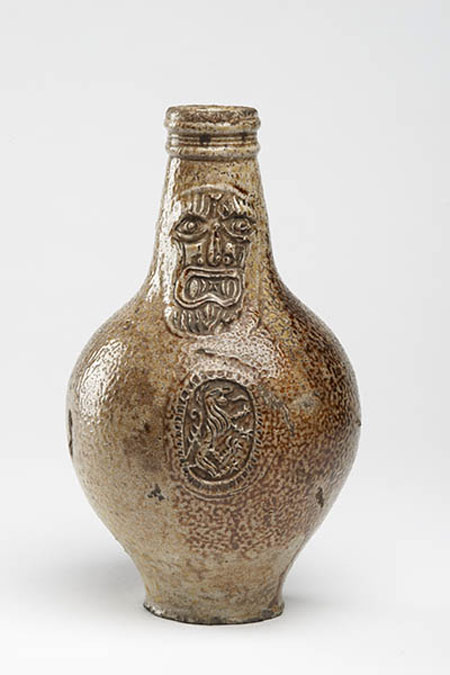 Historical ‘witch bottles’, dating back to the seventeenth century, have been found in cottages, colleges, inns, ecclesiastical premises and historical buildings (often in the course of restoration work) either buried beneath the floor, under the threshold, near the hearth or up a chimney – entry and exit points of the building, and therefore more susceptible to ingress by dark, supernatural forces, witches, ghosts, fairies and demons.

Most of the old bottles found are stoneware bottles and jugs, which were widely traded and common household items in the past. The most popular seem to have been German-made Bartmann stoneware jugs or bottles, colloquially known as the ‘bellarmine’ (after Cardinal Bellarmine), which were brown, pot-bellied and decorated with bearded facemasks, though some glass ones have been found, and the Museum of London even has a plastic pill bottle which has been used as a witch bottle.

Witch bottles were used for protection from magical attack, or from disease. Each was found stoppered and filled with an assortment of items such as iron nails, lead shot, bundles of hair, thorns and small bones. These are all protective items, and iron in particular is inimical to witches and fairies. They were then filled with the final vital ingredient, the urine of the victim (the person who needed protection from magical attack), stoppered and buried.

According to Joseph Blagrave’s Astrological Practice of Physick, 1671:

“Another way is to stop the urine of the Patient, close up in a bottle, and put into it three nails, pins, or needles, with a little white Salt, keeping the urine always warm: if you let it remain long in the bottle, it will endanger the witches life: for I have found by experience that they will be grievously tormented making their water with great difficulty, if any at all, and the more if the Moon be in Scorpio in Square or Opposition to his Significator, when it’s done.“

One of the earliest descriptions of a witch bottle in Suffolk, England, appears in 1681 in Joseph Glanvill’s Saducismus Triumphatus, or Evidence concerning Witches and Apparitions:

“…(The) Wife had been a long time in a languishing condition, and that she was haunted with a thing in the shape of a Bird that would flurry near to her face, and that she could not enjoy her natural rest well. The Old Man bid him and his Wife be of good courage. It was but a dead Spright, he said, and he would put him in a course to rid his Wife of this languishment and trouble… Take your Wive’s Urine as before, and Cork, it in a Bottle with Nails, Pins and Needles, and bury it in the Earth; and that will do the feat. The Man did accordingly. And his Wife began to mend sensibly and in a competent time was finely well recovered; But there came a Woman from a Town some miles off to their house, with a lamentable Out-cry, that they had killed her Husband. They askt her what she meant and thought her distracted, telling her they knew neither her nor her Husband. Yes, saith she, you have killed my Husband, he told me so on his Death-bed. But at last they understood by her, that her Husband was a Wizard, and had bewitched this Man’s Wife and that this Counter-practice prescribed by the Old Man, which saved the Man’s Wife from languishment, was the death of that Wizard that had bewitched her.”

As well as bewitchment, the witch bottle was used for protection against disease. The plastic witch bottle in the Museum of London was found in the River Thames, seems to date from 1982, according to the latest coin found within it, along with slivers of metal, coins, a tiny bottle of oil of cloves- and a large number of human adult teeth. It seems to have been aimed at protection from toothache or tooth decay, since oil of cloves is a remedy for toothache.

Modern witches also make witch bottles. Some may baulk at using their own urine, but protective items such as thorns and nails may be used in them. Many years ago, I made a protective witch bottle on the seashore in Dorset, filled with protective stones, sand and filled and charged with the seventh wave of the sea. It rests on my threshold still.