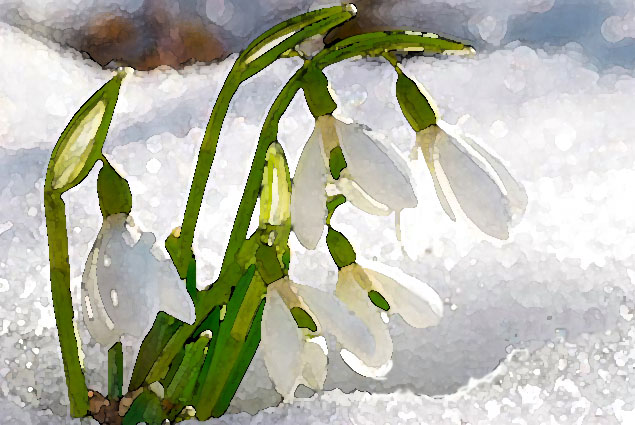 February, though it the shortest month of the year, is said to have the worst weather. Native American tribes called the full moon of February [1] ‘the Snow Moon’, ‘the Hunger Moon’ or ‘the Storm Moon’. [2] In the mornings, my garden pond is frozen, and the plants are rimed with frost. Some days, a blanket of powdery white snow covers the earth, showing up the angular marks of bird feet, printed like runes on the ground, as the hungry birds try to find a fallen seed or a scrap of bread.  Winter seems to be dragging on, and if we didn’t see signs that spring is around the corner, it might be considered the dreariest month of all. Yet the rain, the cold and the snow are cleansing the face of the earth, destroying harmful bacteria, soaking the soil with life-giving moisture and filling the rivers and reservoirs, all of which will ensure good crops later in the year.

Just as the Earth is being washed clean, many ancient festivals of February reflect the theme of purification. The name of the month itself is derived from the Latin februarius which means ‘purification’.  According to the Roman writer Ovid, in ancient times purgation was called Februa: “Of this our month of February came… For our religious fathers did maintain, purgations expiated every stain of guilt and sin”. [3] He explained that the custom had come from Greece where it was held that pure lustrations could cleanse any sin or impious deed. February was once the last month of the Roman year and the idea seems to have been to propitiate the spirits of the Gods and ancestors, atone for any offence given to them, and so prepare for spring and the coming year with a clean slate.

The ancient Greeks celebrated the Lesser Eleusinian Mysteries this month, during which those who were planning to participate in the Greater Eleusinian Mysteries in September went to Athens to be purified of any ritual impurity or sin (miasma). [4] As Clement of Alexandria wrote: “The mysteries of the Greeks begin with purification,” [5] and in most mystery traditions, ritual purification is necessary before the would-be initiate can approach the Gods. At the centre of the Eleusinian mysteries were the agricultural goddess Demeter and her daughter Persephone, the goddess of spring who was associated with purity. [6] Representations show Demeter seated on the kiste (the basket which held the ritual implements of the Greater Mysteries which would not be revealed until the autumn), and the initiate holding out his hand to touch the snake which coils from the kiste to Demeter’s lap.  [7]  The snake symbolised mystery and rebirth, and the fact that the initiate was ready to receive the mysteries at the autumn equinox.

Just as people purified themselves, their homes and the tombs of their ancestors at this time of year, there are many stories of goddesses cleansing themselves in sacred waters in order to renew themselves and restore their virginity. The Greek goddess of love Aphrodite renewed her virginity every year by bathing in the sea at her birthplace of Paphos in Crete. Artemis, the moon and hunt goddess, refreshed her virginity by bathing every year in a sacred fountain, while Hera, the Queen of Heaven, bathed in the spring at Kanathos near Argos in order to become a maiden once more.[8] Even in Christian lore, Candlemas (2 February) is the feast of the purification of the Virgin Mary. The maiden goddess is associated with purity, new beginnings and regeneration, so these seem to be metaphors for the old year being washed away and turned into spring,

There was similarly a Scottish tradition that at the beginning of spring the Cailleach (‘Hag’ or ‘Veiled One’) drank from the Well of Youth and transformed into the youthful maiden Bride. [9] The Cailleach ruled the winter months, while Bride (Brighid/Brigit) ruled the summer months. [10] The Cailleach is the female personification of winter [11]. Her staff freezes the ground [12] and she brings storms and bad weather, though she protects deer and wolves, and is the mother of all the gods. [13] Là Fhèill Brìghde (St Bride’s Day, 1 February) was said to be the day that the Cailleach gathered her firewood for the rest of the winter. If she intended the winter to last a good deal longer, she made sure that the weather was bright and sunny so she could go out and gather plenty of fuel. [14] If the weather was terrible, it meant that the Cailleach was asleep and would soon run out of wood, so winter was nearly over.

In Scotland, St. Bride’s Day was considered the beginning of spring, with Bride melting the river ice. [15] According to Scottish folklorist Alexander Carmichael “Bride with her white wand is said to breathe life into the mouth of the dead Winter and to bring him to open his eyes to the tears and the smiles, the sighs and the laughter of Spring. The venom of the cold is said to tremble for its safety on Bride’s Day and to flee for its life on Patrick’s Day.” [16] As Nigel Pennick puts it “…at this time of year, Brighid symbolises the opening out of enclosed, invisible nature concealed in the darkness of wintertide into the visible world of light.” [17]

In Scotland, the serpent, sometimes called the noble queen, is supposed to emerge from its hollow among the hills on St Bride’s Day:

The serpent throws off its skin annually and is thereby renewed, making it an ancient symbol of regeneration. Snakes and maidens also featured in the February celebrations of the Roman goddess Juno Sospita (Juno the Saviour). At the beginning of February, the consuls made a sacrifice to her, while young girls offered barley-cakes to the sacred snake in her grove. If their offerings were accepted, their virginity was confirmed, and the year’s fertility assured.

During this month animals begin to shake off their winter sleep and emerge from hibernation. Some are said to come out to check the weather on Bride’s Day or Candlemas, testing whether it is safe to emerge or if they need to go back to sleep. Badgers were reputed to emerge at noon and if they saw their shadows, they went back to their setts. If they didn’t see their shadows, they stayed out, and the worst of winter was over. In Huntingdonshire the day was even called ‘Badger’s Day’. [19] A similar folk belief persists in America as Groundhog Day.

The year is awakening, new and pure, waiting for life to mark it. The lengthening days that follow Imbolc hold the promise of spring and the rebirth of plant life, and the yearly cycle of work on the land begins once more as the earth is prepared for the seed. [20] I think of February as a time of purification during which we can banish negativity in all its forms, a time to cleanse, physically and spiritually, and prepare for the busy season to come as, day by day, the light increases, as we embark on the many personal and spiritual lessons the year will bring.