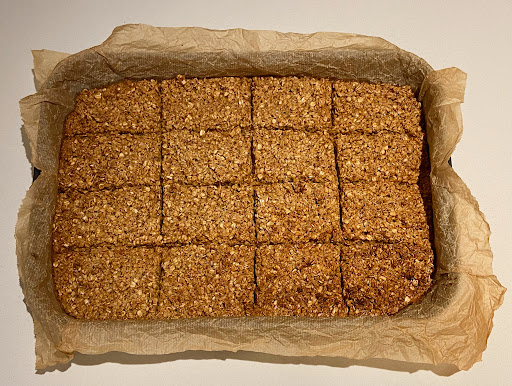 As part of the festival of All Hallows, people, mainly children, in England went out ‘souling’ going from door to door or travelling around the local farms, singing songs in return for apples, soul cakes or ale. The practice started in the Middle Ages when the cakes were offered in return for prayers for those souls suffering in purgatory, but after the Protestant Reformation, which did away with the notion of purgatory, the custom became one of just giving out the cakes as gifts. [1] Sometimes, people would keep the cakes for good luck. The recipes for the cakes varied, sometimes they were made of oats, some contained currants and spices, and in some areas it was traditional to consume seed cakes during All Hallows which coincided with the end of winter wheat-seed sowing. [2] Parkin, a ginger cake, was popular in the north of England, while in Lancashire Harcake was offered to visitors on the day.[3]

Pre-heat the oven to 190 C. Prepare a 10 x 8-inch baking tin by lining it with baking parchment. In a mixing bowl, rub the butter into the oatmeal. Add the ground ginger and syrup. Stir together, gradually add the beaten egg and then the brown ale. Pour into the tin and bake at 190 C for around 90 minutes, though this will depend on your oven, so keep checking. Keep checking and cover the top with foil if it is browning too much. Leave to cool and turn out before cutting into squares.