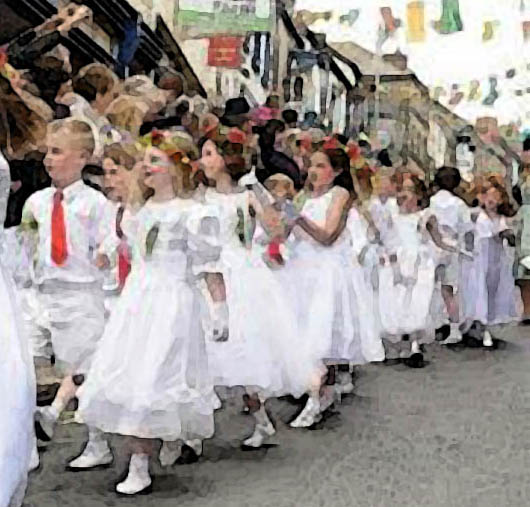 In Helston, Cornwall (England) today is the Furry Day, otherwise called Flora Day or The Floral Dance. It is one of the oldest surviving early summer festivals in Britain. There are several explanations for word Furry, even that it derives from the goddess Flora and the Roman Floralia or the Latin word Feria meaning a fair or holy day.[1] The festivities, as Marian Green says, echo “the idea of the dance of life, and now at the very beginning of summer, the dancers welcome the strength of the returning sun”. [2]

Preparations for the big day begin in mid-April when gatherers cut branches of sycamore, beech and other greenery used to decorate the town. Furry Day itself starts after sunrise when the dancers take to the streets and circle the old town.  This is followed by the Mummers’ play known as the Hal-An-Tow when Robin Hood, Friar Tuck, St George and St Michael, along with several other characters, act out battles in which good defeats evil (i.e. summer defeats winter) and sing the ancient Hal-an-Tow song, which includes the chorus:

Afterwards, around 1,000 children take part in the children’s dance, dressed in white.  At midday, the Furry Dance itself takes place, led by the mayor, driving out the memory of winter and bringing with them the warmth and blessings of summer. [4] At the final dance of the day, the many visitors from all over the world are invited to join in, and the whole town is filled with dancers.