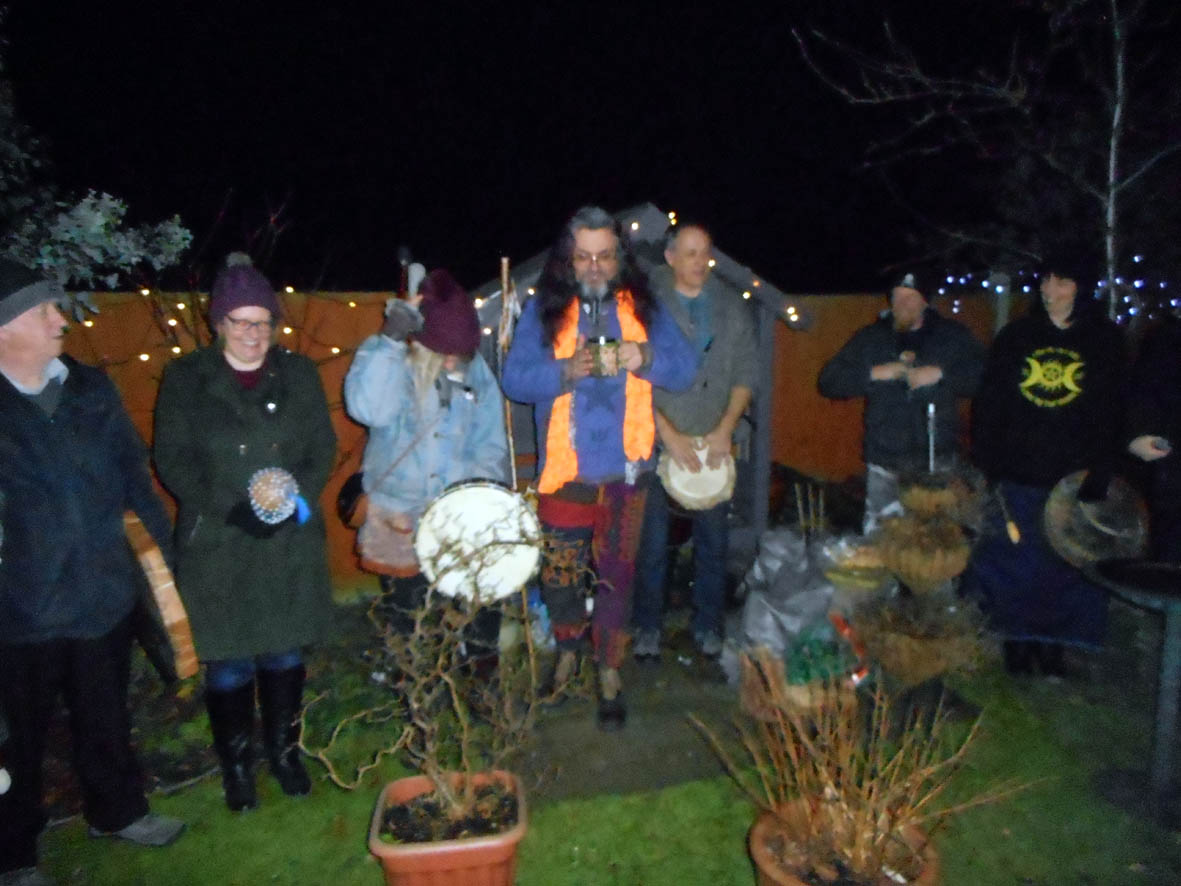 January is the month for wassailing the orchards, waking up the spirit of vegetation and the land itself, and energising the move towards spring.

Today, most people think of wassailing only in connection with toasting the apple orchards. However, in the past, wassailing was a wide-spread custom associated with wishing health to people, crops and animals; apple trees were wassailed to make them bear fruit, and even bees were wassailed to make them produce more honey.  Cattle were toasted to keep them healthy. The prize cow was given a special cake with a hole in the middle (a symbol of the sun) and regaled with the words: “Fill your cups my merry men all!/ For here’s the best ox in the stall!

Oh he is the best ox, of that there’s no mistake,/ And so let us crown him with the Twelfth cake!” The cake was hooked over one of its horns. In parts of Scotland, the sea was similarly honoured, with ale poured into the waves in hope this would encourage good fishing in the coming year. [1] Wassailing the orchards usually involved either the land owner or specially selected bands of wassailers, visiting the orchard at night, selecting the oldest or most fruitful tree (known in Somerset as the Apple Tree Man) to represent the whole orchard.  The tree might be beaten with sticks in order to wake it up after its winter sleep. Bread or cakes soaked in cider would be placed in the tree’s branches and the wassail song sung, then loud noises made to frighten winter spirits away from the orchard.

The word ‘wassail’ comes from the Anglo-Saxon phrase Wæs hal, which was used as a greeting. Wæs means ‘to be’ and hal means ‘hale’ or ‘whole’. The greeting often accompanied the welcoming of a guest with a cup of ale or mead, and so became a toast (the correct response to which is Drinc Hale meaning “I drink to your good health”) and eventually wassailing, the act of toasting someone or something on special occasions with spiced ale or wine.

In the coven we see it as the last of our three rituals of the Yuletide season that finally closes the barren winter cycle and brings back the energy of growth into the land. We tap the tree three times to wake it up, pour cider onto its roots, and put apple cake or toast into its branches to honour it. It’s a very joyful occasion when we wear garlands of ivy, and bang drums to banish all the spirits of winter bane, before passing around the wassail cup, full of spiced cider or apple wine – at which point it gets even merrier. We take it in turns to host the event; some of us only have one apple or pear tree, others several. If you don’t have fruit trees of your own, perhaps you can get together with friends who do, or even perform the ritual in a local orchard or park where fruit trees grow. Wassailing ceremonies are becoming more and more popular, even among non-Pagans.

The ritual is carried out in the fruit orchard. Wear a garland of ivy.  Choose the largest and most productive tree on the plot, which stands for all the rest. Tap the trunk of the tree three times to ‘wake it up’ with your wand and say:

Come in plenty to every one.

Give Earth to drink and she’ll not fail

Places the cake in the main fork of the tree. The wassail drink is thrown three times at the roots of the tree and chant:

And whence thou may’st blow

And pockets full too!”

The wassail bowl is recharged and all drink the health of the orchard with the word ‘wassail’.

You can then take a burning brand and carry it around the property to infuse the spirit of warmth and fire into the earth, to purify it and bring luck for the coming year.

Everyone gathers around the fire and recharges the wassail bowl for a final toast of ‘wassail’.

Put a ¼ pint of cider in a pan and add the grated apples.  Cook until the apple is soft and add the brown sugar, ginger and the other 2 pints of cider. Heat through but do not allow to boil. Add some grated nutmeg and pour into a large cup or bowl.

Using your fingertips, rub the butter into the flour and salt until it resembles breadcrumbs. Add the apples and sugar, then mix in the egg and enough milk to make a stiff dough. Pour into a 20 cm (8 inch) tin and bake at 190 C/375 F/ gas mark 5 for 45 minutes.