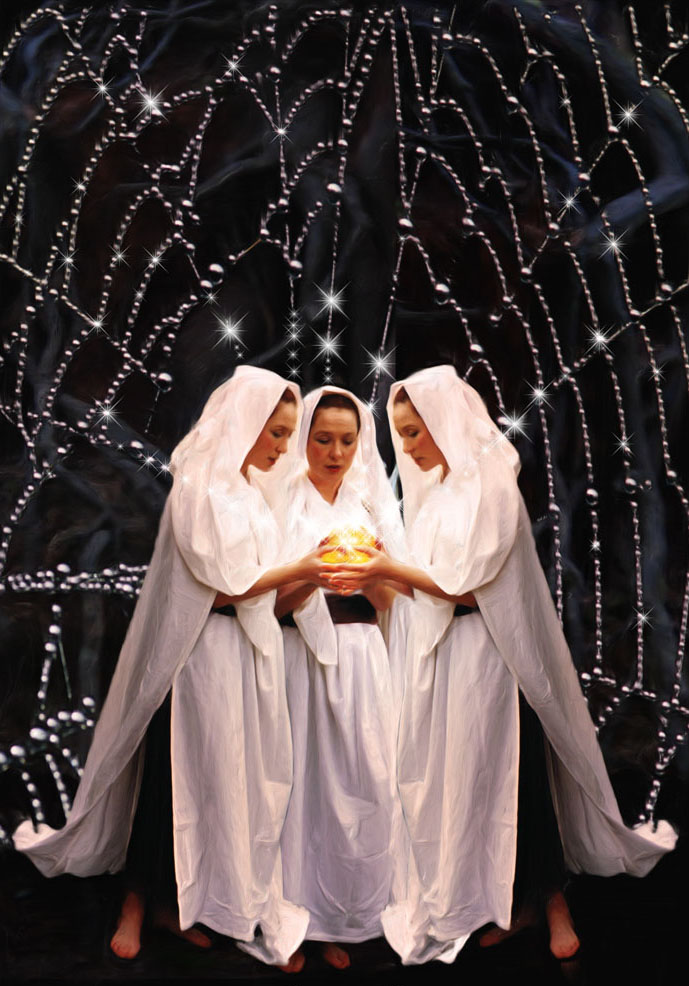 During the longest nights of the year, families would have spent their time huddled around their hearths, pursuing what crafts they had sufficient light for, telling stories, and listening to the cold winds outside, imagining the spirits of misery and chaos getting closer. Ancestral spirits were propitiated with libations poured onto the hearth. [1] St. Jerome, in the fifth century, reported the laying of tables with an abundance of food on the first day of December, condemning it as a Pagan charm to ensure abundance during the coming year. [2] In the early eleventh century, Burchardus of Worms said that people still laid tables with food and drink and three knives for “those three Sisters whom the ancients in their folly called Parcae.” [3]The Parcae were the three Roman goddesses of birth and midwifery, later associated with the Greek Fates, the Moirai, and like them and other fate goddesses and the northern Wyrd Sisters, they span, wove and cut the metaphorical thread of human life.  It is fitting to associate their midwifery with the imminent birth of a new cycle with the rebirth of the Sun and thus all life on earth. Possibly the name Modranicht (Night of the Mothers), which Bede says the Pagan Angles gave to Christmas Eve may be connected with this practice. [4]

Offering to the Three Fates

It is fitting to begin December with an offering to the Three Fates, the weavers of destiny. Put out three small cups of red wine, fruit and bread, along with three knives. This is a way of honouring the powers that will bring more provisions during the coming year. Have ready three candles, red, black and white.

Light the white candle and say:

Goddess who upholds the primal law of the Universe, to which even the Gods are subject. Allow me to know and release that which cannot be changed, the things that already been: the deeds of myself and others.

Light the red candle and say:

Goddess of becoming, drawing together the threads of the past and the layers of my thoughts and deeds to make the present. Allow me to understand how my actions now are weaving my future.

Light the black candle and say:

Goddess of that which may become, allow me to understand the web of possible futures, for my destiny and my soul are one and the same.

Goddesses of Fate, look kindly upon my offerings, and keep me in your care.

Allow the candles to burn out.

One thought on “1 December – Offerings to the Three Fates”