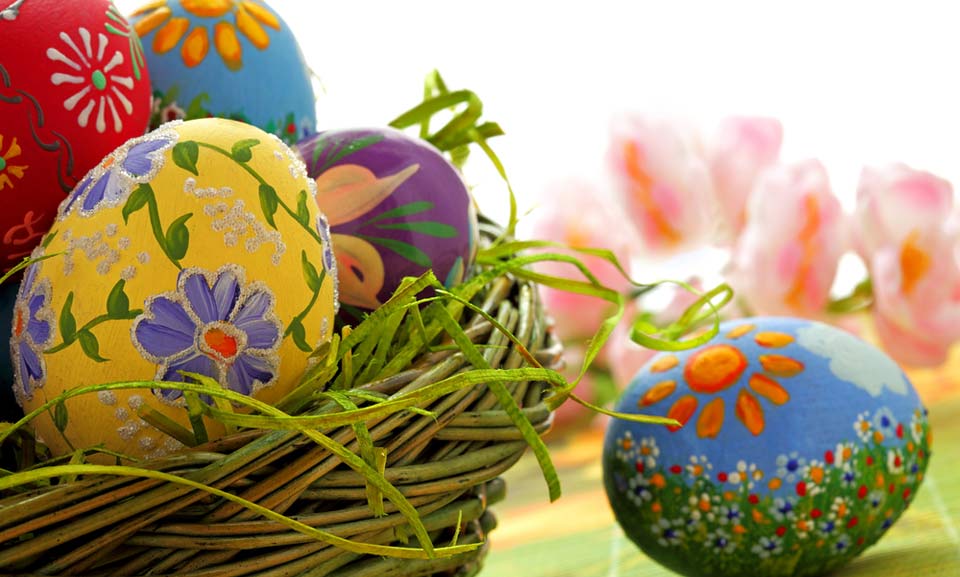 Out of the winter, spring comes. Out of the darkness comes light. In the midst of despair is hope. The world is renewed with youth and vitality, freshness and vigour. Birds are nesting and egg laying, and animals mating, promising us that life will be renewed and continue. The Sun reborn at the winter solstice has gradually been gaining strength, and at the vernal equinox the light finally overcame the darkness, and the days became longer than the nights. The Saxons called March Lentmonat, ‘lengthening’ referring to the lengthening of days, a word the Christians adopted as ‘Lent’, the days leading up to the festival of Easter.

The folk customs of the season reflect these themes. New clothes were often bought for Easter, particularly gloves and new bonnets for women. [1] With the increase in light, wild and domestic birds start laying, a symbol of renewal and fertility. Forbidden during the fasting of Lent, they could now be eaten for luck, or given as gifts. In many districts, eggs were coloured or eaten for luck at Easter, and there was (and in some parts of England still are) egg rolling down the hillsides, perhaps to reflect the passage of the Sun, or perhaps just for fun, and the winner is the egg that rolls the furthest. The Pace Egg mumming troupes go out, performing mumming plays in return for eggs and beer. [2] In Germany, it is important to eat something green, and fire wheels are rolled down hills, straw stuffed into large wooden wheels, set on fire and rolled it down a hill at night. If all wheels released roll straight down the hill it is said to bring a good harvest. [3]

In 325 CE the Council of Nicaea established that Easter would be held on the first Sunday after the first full moon occurring on or after the vernal equinox, which was approximated to March 21. It is often claimed that Easter is an etymological appropriation of the Pagan festival of Ostara. Certainly, since the 1970s, most modern Pagans have called the spring equinox Ostara, with many books claiming that Ostara is a Germanic goddess of spring associated with eggs and hares who gave her name to the Christian feast of Easter. Sadly though, Ostara is not actually an old Germanic name for the vernal equinox. The goddess Ēostre was mentioned, though only once, in early literature, by the seventh/eighth century English monk Bede in his De temporum ratione (‘The Reckoning of Time’). He wrote that during Ēosturmōnaþ (the lunar month of March/April) Pagan Anglo-Saxons had once held feasts in Ēostre’s honour, but the tradition had died out by his time.  Based on this single source, folklorist and recorder of fairy tales Jacob Grimm attempted to reconstruct a possible Germanic equivalent goddess calling her Ostara, arguing that since Germans called April ôstarmânoth while most countries retained the Biblical pascha for Easter, the word must relate to áustrô, from the Old High German adverb ôstar which “expresses movement towards the rising sun”, concluding that the putative deity would have been a goddess of dawn.  [4] Given the lack of any evidence for Ostara or Ēostre, scholars have dismissed the goddess as a pure invention of Bede, [5] concluding that the Old English word eastre is a simply an approximation of the Latin albae (’white’), a word sometimes applied to Easter. [6] [7] It has to be said that this doesn’t mean that she didn’t exist – it is unlikely that Bede made her up – but we have one very brief mention of her name, and it may be connected with the word for east, the direction of the rising Sun. We certainly know nothing at all about her worship, and there is most definitely no mention of hares and eggs as cult symbols. There is no linguistic connection with the Latin word oestrus (relating to ovulation and eggs), nor with the Middle Eastern goddesses Ishtar and Astarte.

The celebration of Eater does echo Pagan themes, however. In ancient Rome, a ten day festival in honour of the vegetation god Attis, son and lover of the goddess Cybele, took place. A young pine tree representing Attis was carried into the city like a corpse, swathed in a linen shroud and decked with violets, then placed in a sepulchre in Cybele’s temple which stood on what is now Vatican Hill, near where St Peter’s stands. [8] On the Day of Blood, also called Black Friday, [9] the priests of the cult gashed themselves with knives as they danced ecstatically, sympathizing with Cybele in her grief and helping to restore Attis to life. That night was spent holding a vigil over the tomb. The next morning, a priest opened the sepulchre at dawn, revealing that it was empty and announcing that the god was risen. This day was known as Hilaria or the Day of Joy, a time of feasting and merriment. [10] The worshippers cheered as the priest announced, “Be of good cheer, neophytes, seeing that the god is saved; for we also, after our toils, shall find salvation!” [11] The longer, warmer days of spring had come, and vegetation was emerging from the earth. Likewise – and this may be a direct appropriation – in Christian tradition, Easter marks the death and resurrection of Jesus Christ, sacrificed on a cross, but when his tomb was opened after three days, it was found empty, and he was declared to have risen.