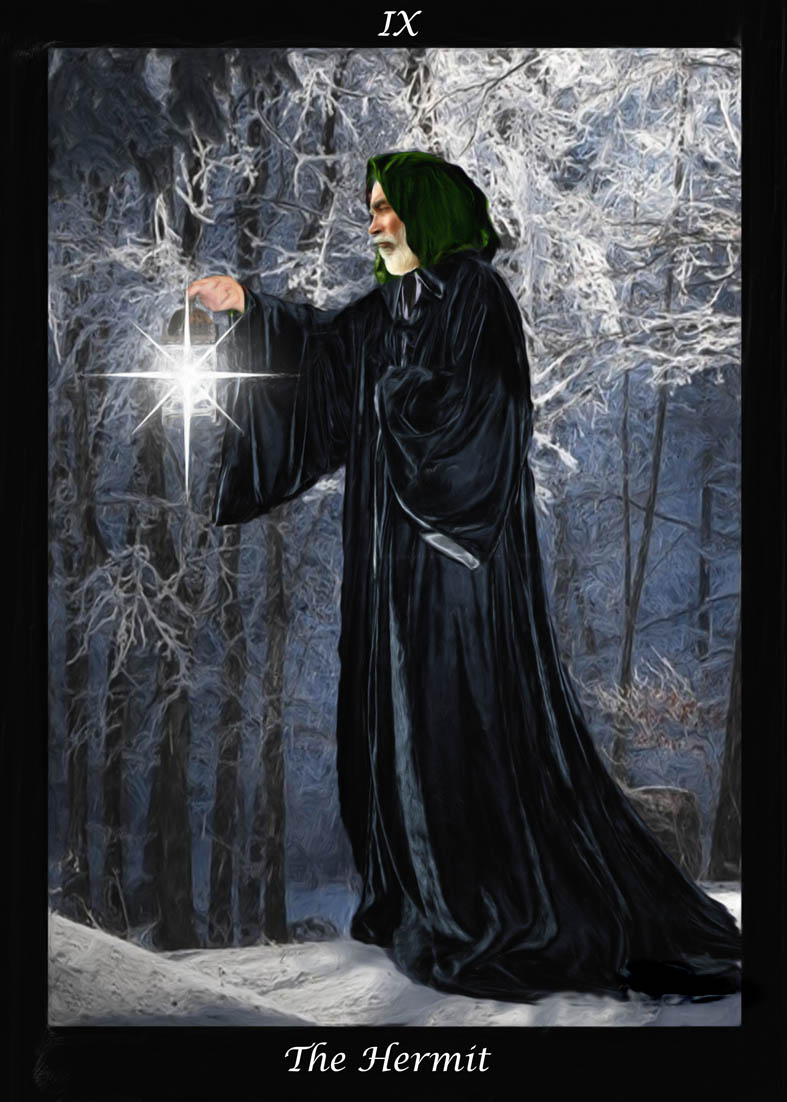 The Hero’s Journey tells us that the universal tale is the one of the hero who receives a message from the Otherworld and sets off on a quest, meeting characters who help or hinder him along the way. [1] This is a story also told in the Tarot’s Journey of the Fool. When we get to the Hermit card, the big questions of life have become overwhelming for our hero, and he sets off alone into the wilderness, in search of spiritual answers. Like the Hermit, most of us here are on a spiritual quest, actively searching for meaning.

The Hermit’s quest was triggered by the feeling that there must be more to life than the mundane round of eat, sleep, work and die. He longed for something more, something profound which would give meaning to his life. Every moment, most of us are thinking about the future or the past, chasing something pleasant or trying to avoid something nasty. But usually, in ways so subtle that they escape attention, we’re seeking something. For many there comes a point where the questions demand answers: “Why? What’s it all about? Is this all there is?”

If this were all, then it might end there in disappointment, but often that longing triggers a response form the Otherworld and we glimpse something transcendent. Though fleeting, it changes everything.

In legend, King Arthur and his court had a vision of the Holy Grail, the quintessence of spiritual power, and all the Knights of the Round Table set off in pursuit of it, leaving behind their rich lives and noble pastimes to enter Forest Adventurous in pursuit of the mysterious chalice. There they underwent many tests and trials to determine their worthiness. On the way, the knights met with priests and wise women, angry warriors and seductive temptresses, grave perils and terrible dangers. Some didn’t look very hard and consequently found no trace of the Grail, others got bored and wandered away. Some found it too hard and ran away to seek an easier path. Some just returned to an easy life of sensual pleasures. Some were frightened away, others were tempted away. Others searched high and low, and died exhausted. Others railed in frustration, blaming the Heavens or King Arthur for sending them on a wild goose chase. The desire to find the Grail was not enough to discover it.

The knights were used to fighting flesh and blood enemies, but in the quest for the Grail, the search was really an inner one, and their enemies were their own egos and the darkness in themselves.

In the end, it was the pure knight Galahad who found the Grail. He attained the Grail, not by years of exhaustive searching, but because of what lay in his heart.

The Grail is a symbol of the spiritual power that creates and nourishes the Cosmos. There are many other symbols of that power, and many names for it. The Grail brims over with the endless stream of Divine energy that flows throughout creation, underpinning all life and giving it meaning. It is filled with joyous spiritual and emotional sustenance for those who drink from it, with healing for the body, mind and spirit, and the plentiful flow of life. But though it is eternal and always present, the Grail is not given to all who covet it. [2]

Paradoxically, though it is always there, the very act of searching for it can stop us finding it. Many of Arthur’s knights searched high and low, some for decades. The spiritual search we each undertake can become as frenetic as some of the knight’s adventures – dashing down one promising path after another without following any to its end, searching for guides who can simply put the Grail in our hands for the asking, or talking about the path instead of walking it, or comparing this spiritual technique with that one, when it is not the way of walking that will take you to your destination, but the act of continuing to put one foot in front of the other. Sometimes, we forget why we are searching, and the search becomes an end in itself, a way of life. Spirituality can become a consumer lifestyle, and a way of enhancing and enlarging the all-important ME, the ego.

Galahad found the Grail by virtue of simply being who he was – a pure heart. He alone was able to remove his ego from the search and let whatever would come, come, without desire, without preconceptions. Only then could the Grail be seen. The Grail didn’t suddenly appear where it was not before: it was always there, but the knights were too busy looking for it to find it. It is only when we stop searching that we find what we are looking for.

If you ever watch children play, they are totally absorbed in what they do. The appearance of a butterfly can bring gasps of excitement and discovery – it is a new thing, and wondrous. We lose this wonder as we grow, and become jaded with the experience of the passing years. We stop playing and start working. There was a Rabbi who often used to begin his lectures by announcing that a miracle had happened. When the audience begged him to reveal what it was, he would say, “The sun set”. As the Rabbi once put it, “Just to be is a blessing. Just to live is holy.” [3]

There is an amazing temple in which the Divine is always present. It is called the world, and we already live in it. Divine energy radiates in the Stones of Avebury, and in the pebbles in your garden. It swirls through the groves of the forest, and in the dandelions pushing through the pavement cracks on the High Street. If you open your eyes, you will see it. All the rooms of the temple are equally holy.

Ultimately, only the techniques of discovery can be taught, and it is up to you whether or not you use them, but the discovery itself is yours alone, a mystical knowledge which cannot be given, which cannot be taught. However, it can only happen when the frantic searching stops and you become still, when the spiritual narcissism stops, and you allow the little self, the ego, to step aside. It can only happen when you open your heart to the universal flow of magic which is the essence of the Grail.

Walk your path in honour and strength, but walk it to the end.

[1] Joseph Campbell, The Hero with a Thousand Faces, Fontana Press, 1993

One thought on “The Spiritual Quest”